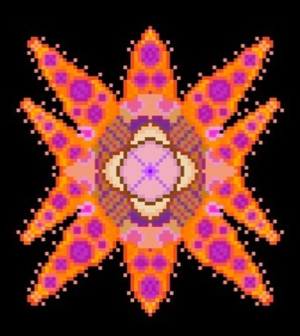 If you would like a logo for your programming language, reach out to me in the discussion page!

The sweet, charming little bundle of joy born of Heck and Starstuff.

The interpreter is still maturing, and easily bored. Repetition is boring!

I created Blood, also called Blood32, after watching videos by User:Truttle1. I was recovering from a nosebleed at the time, so I like to think I put my blood into the language. I had to get a keyboard cover!

A metalanguage to run trivial bf substitutions and bf equivalents.

A Turing incomplete language in which source is prone to random crashes; this language features high-level operations for arithmetic with integers.

An assembly style language that allows for the implementation of subroutines, or macros.

To try MacroBeep online, this repl is available. Beeps are silent because the IDE for repl.it cannot produce them.

I created Something because I grew tired of the vague error message "Oops! Something went wrong!" on so many apps.

Anything ever typed can compile to a runnable program with Starstuff.

Translator Handles Everything. A language designed to interpret arbitrary text as runnable code. It is Turing complete and can run bf programs with modified instructions.

A programming language designed for the adult learner.

A language with a very forgetful instruction pointer.

A language designed to interpret anything at all and run it.

You can call it S lander if you like.

A deque-based language filled with features for experimenting with computation on theoretical machines. Vessel is based on Blood32.

It is as the title suggests. The instruction pointer behaves like a toddler.

Based off the nonsense word, "nagawooski" from a season five episode of Big Mouth.

He is our hero!

Languages to Interpret Everything: How Anyone can Code