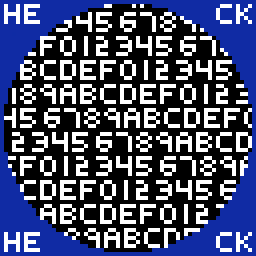 Heck is a programing language designed such that source code is expressible as a hexadecimal number. It was created by User:PixelatedStarfish in 2021. The esolang is designed such that the uninitiated will utter "What the heck?!" upon attempting to read source.

The language was initially conceived as similar to Lenguage, such that a hexadecimal value would be converted to binary and evaluated at a low level.

Heck is stack based. The following operations can modify the stack.

For debugging purposes, a parse string is included in the interpreter output such that codons and operations are separated by a slash.

This proof of Turing Completeness shows that Heck is translatable to bf to establish Turing Completeness. The unbounded stack of values is comparable to the unbounded tape of a Turing machine. A value on the stack can store an integer, which is more than sufficient to act as a bf cell. For all intents and purposes, the value at the top of the stack is pointed to and can be modified.

To translate between the two languages, use this table. (Note XX and YY stand in for hex values.)