efghij (everyday food, garden & home item jenga) is an esoteric programming language invented by User:Timwi in 2016. It uses everyday objects found in kitchens, home offices, garden sheds and bedrooms to express program logic. Despite its appearance, it is not stack-based, though some might say it’s object-oriented.

The following constructs are defined so far: 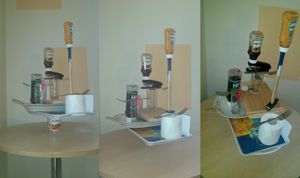 The BelMandel (a.k.a. factorial) function, shown from three different angles. Note that the function name is obscured in two of the three screenshots.

This example demonstrates the BelMandel (Bigness Exactly Like Multiplying All Naturals Deemed Equal or Less than) function (otherwise known as factorial). This demonstrates a single-parameter function declaration in which the parameter is identified by sauces.

In this example, the tray and the cutting board constitute code blocks. The oblong plate, however, has a clothes peg on it, which expresses a for loop. The fork is a local variable.

The fork variable is initialized to 1 within the for loop’s initial-value expression. The sauce with the rubber band indicates that the number of iterations is equal to the function’s argument. The stuff on the cutting board is the loop body. Using a stapler, the fork is multiplied by the sauce and the result assigned to the fork using a drinking glass. A hammer decrements the sauce, which demonstrates that the function’s parameter can be used as a local variable too.

Finally, the toilet roll indicates that the return value is the final value of the fork. 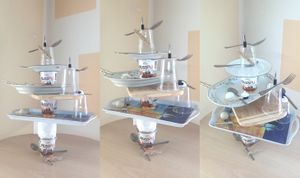 The NUSSPLI (a.k.a. Ackermann) function, shown from three different angles. Note that the function contains recursive invocations of itself.

This example demonstrates the NUSSPLI (Numerically Useless, Staggeringly, Stupefyingly, Preposterously Large Integers) function (otherwise known as the Ackermann function). It exemplifies a two-parameter function: internally, the parameters are named fork and spoon; externally, the first parameter is markerless and the second parameter is identified by a clothes peg. The function body is a single toilet roll with an expression balanced on top of it.

The tray, having a ping pong ball on it, is a conditional that checks the value of the fork. If this value is zero, the expression with the adhesive hook is returned, which is the addition (upside-down plastic cup) of the spoon and the value 1 (lone bottle cap).

Within this ternary, the condition is the value of the spoon; if it is zero, the result is 1 (lone bottle cap marked with an adhesive hook); otherwise, it is another recursive call whose first argument is the fork and whose second argument is the spoon, decremented by 1 (by adding −1 to it). Note that, since it is not possible to clip the clothes peg onto the upside-down plastic cup, a rubber band can be used to hold it in place. If this rubber band would cause ambiguity, blu-tack can be used as well. 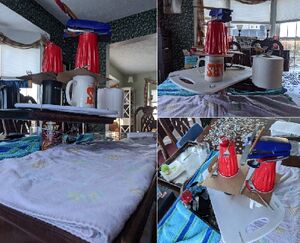 This example demonstrates the CHUNKY (Counting How Uniform Nodes Knive Yours) function (otherwise known as the integer divide function) by User:BakersDozenBagels. It uses a while loop (the white cutting board) to perform its function. 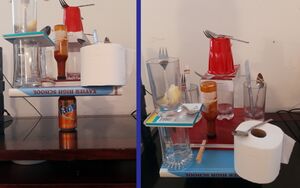 The FANTA (a.k.a. Fibonacci) function, shown from two different angles.

This example demonstrates the FANTA (Former And Next Terms Added) function, made by User:JakkOfKlubs. This program outputs the nth number in the Fibonacci sequence, where n is equal to the parameter represented by the hot sauce.

This program contains the base platform being a blue book, and a for loop represented by the red book with a clothes pin attached to it. The number of iterations of the for loop is represented by the hot sauce. Additionally, there are three variables being assigned, being the fork, spoon, and knife.

After the loop is completed, the toilet paper roll returns the final value of the spoon.

Everybody is invited to enrich the instruction set with new items, as long as you document them here (it’s a wiki!) and upload photos of a reasonable example function that makes use of them.