This is work-in-progress, please don't point and laugh.

This sentence will change after every MediaWiki upgrade: MediaWiki 1.33.1 post-upgrade edit test.

This sentence was changed to test the CAPTCHA.

This content is outdated and replaced by a real Grasp page. I will remove this later. Honest.

Grasp is a graph-oriented esolang; there are far too few of them so far. Designed (if you can call it that) by User:Fizzie.

The main concept in Grasp is that the code is stored as (multi-field) nodes in a (directed) graph, and there are graph-manipulation operations provided. It is this mostly superficial similarity to Lisp (w.r.t. the "code and data both are lists" thing) that was an inspiration for the name. (It's short for "GRAphS are being Processed".)

A Grasp program consists of a set of nodes. Each node has the following set of fields, named vaguely after their common purpose in operations. Each field also has a fixed type, given in parentheses after the field name; the types will be explained later. In many cases, not all fields of the node will be used for anything meaningful.

The data types are:

More complicated data types can be built from nodes. In particular, strings are represented by singly (or doubly, if you want) linked list of nodes, chained with their next pointers.

In a running Grasp program, there is a list of instruction pointers (IPs). Each IP points to a particular node, and also has a stack that can store both int and pointer values. At each tick, the list of IPs is processed, in order. During the processing, each IP first does whatever the command field of the node it is pointing at says, and then follows the pointer in the next field of that node. If the next field is null, the IP is removed from the list.

At start, the IP list contains a single IP pointing at the node named "main". It is an error if such a node does not exist. Execution terminates if the IP list becomes empty.

In the hand-drawn examples, underlined text are name field contents, first item (discounting a possible underlined name) is the command, the small square with "N" in it is the next field, and the rest have their names specified. Pointer values are indicated by graph edges starting from the field edge; non-pointer values (or null pointers) are given as "name: value" inside the field. ∅ denotes a null pointer.

The first node (named "loop"; should be "main") reads a single character, and stores it to the value field of itself. The second node does +1 so that EOF (-1) value would become zero. Third node clears the next field of the fourth node; "by default", execution terminates here. The fourth node tests the +1'd value; if it's nonzero (not at EOF), the node sets its own next pointer to the fifth node. Finally, the fifth node writes out the original value and loops back. 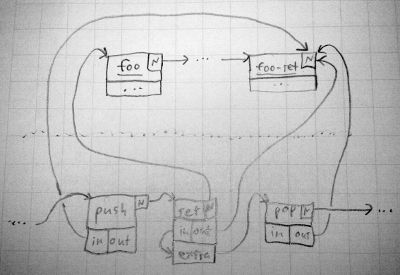 Here's how you could do a manual subroutine call; it might be useful for "dynamic" calls, since the call/ret pair can only handle named nodes. It's not very thread-safe, though; you could do something more like the call/ret sequence for that.

A subroutine for appending two linked-list-strings. I'm attempting to construct a BrainFuck interpreter; this thing will be used for reading the BrainFuck source with multiple gets calls.

Usage: pass as input argument (in of call) a pointer to a node where the next and extra fields point to strings. The latter will be appended (destructively) to the former. The return value (out of call) will be the appended string; to append "in-place", point the out at the next field of the in node.

How it works: well, I guess it's obvious from the image. I mean, it's basically just a flowgraph, right?

Incidentally, in case you feel inclined to criticize the penmanship; consider the alternative, Graphviz: