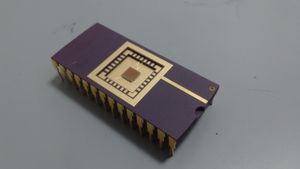 Cryptoleq processor made at NYU

Cryptoleq is a language consisting of one, the eponymous, instruction, is capable of performing general-purpose computation on encrypted programs and is a close relative to Subleq. Cryptoleq works on continuous cells of memory using direct and indirect addressing, and performs two operations

are addressed by the instruction pointer, IP, with the value of IP addressing

are defined as follows:

are encrypted values based on a cryptographic parameter,

corresponds the Subleq test if the values were unencrypted. A program written in Subleq can run on a Cryptoleq machine, meaning backwards compatibility. Cryptoleq though, implements fully homomorphic calculations and since the model is be able to do multiplications. Multiplication on an encrypted domain is assisted by a unique function

equals to encrypted zero if the

is equal or less than zero,

, or equals to the re-encrypted

otherwise. The multiplication algorithm is a top-down model that is based on addition and subtraction, uses the function

and does not have conditional jumps nor branches.