B2, also known as B^2 and B2, is a programming language intended to make programming very simple and use plain language. It is pronounced bee-squared. B2 stands for "Basic Basic." It has a compiler (and editor) written in Javascript which compiles B2 to WebAssembly text format. When version 1.0 comes out it is planned that it will also compile to WebAssembly binary format and will allow users to easily download their program and run it. It has many common elements seen in programming languages. B2 is a bounded-storage machine, see "Computational Class" for details.

The editor (as of prerelease) compiles to WebAssembly Text Format, (.wat file) which means that before it can be used, it must be converted to WebAssembly Binary Format using wat2wasm. This functionality is planned to be built-in in version 1.0.

The editor supports saving and loading. Its compile time is extremely fast. It has a console which will throw compilation errors. The compiler also supports full syntax highlighting, though it is not automatic (the highlight button must be pressed). Additionally, the editor can run B2 code via the WebAssembly output. If the output box is clicked, it brings up a menu which allows parameters to be specified.

Note: Copy and pasting examples from a website like this may cause compilation errors that should not be happening do to how some browsers handle copy and pasting HTML. Link to the editor hosted on GitHub. 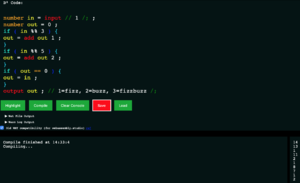 FizzBuzz in the B^2 Editor

The goal of the language is to be an extremely easy language to learn, while still having functionality. Some syntax is unique, while most is a mix of python and C syntax.

The B2 is separated into lines and words. Each line is separated into words, which are separated from each other by spaces. Lines are not required by the language, so they are purely for readability. However, spaces between words are very much required. Every command should end in a semicolon (though this is not always necessary it may cause issues without them)

Variables can be set by simply typing the variable name, an equal sign, and what it should be set to. E.G.

As seen above, start comments are started with a // and must end with a /;. Due to this syntax, all comments are "block" in nature, meaning they can span as few words or as many lines as you'd like.

Math operators are done with the first three letters of the operation then two numbers. All math operations support both the decimal and number types. Example:

If and Else Statements

If statements allow for what is inside curly brackets to be run if a condition is true.

For and While Loops

For loops are effectively while loops with declarations in them. They use the to command to count to a certain number before they stop executing. Note that the to command can only be used in the context of the second part of a for loop. For Example:

round is a command which is only available for decimal types which rounds the float to the nearest integer while still keeping it in float form.

All lines start from zero. Thus, given the program:

The compiler will throw the error "Type mismatch. Expected number but got decimal. Line 2 word 3." This means the error is on the line with the output command and the word x.

Common code examples for languages are as follows. Noticeably, there is no hello world example, as B2 does not support strings.

Note: This program outputs all of them added together do to the limitations of WebAssembly.

Since B2 compiles to WebAssembly, it has the following limitations shared for all languages that compile in this way:

Despite these limitations, the fact that B2 compiles to WebAssembly means that:

B2 is a bounded-storage machine, as both its datatypes (number and decimal) take up a limited amount of memory (32 and 64 bits respectively), and therefore it has a limit on storage.