Wumpus is a recreational, two-dimensional programming language, where the instruction pointer moves on a triangular grid (and to the best of the author's knowledge, the first such language). It's a language of the Fungeoid variety, in that it is primarily stack-based, allows the source code to be modified at runtime and takes several inspirations from Fungeoids that came before it, primarily Befunge itself and ><>. However, Wumpus also brings a number of new features to the table (in addition to the triangular grid), such as 20 registers which are arranged around the faces of an icosahedron.

The name is, of course, a reference to Hunt the Wumpus, a classic computer game with an icosahedral dungeon map. Hunt the Wumpus also has historical significance for 2D programming languages, thanks to Wim Rijnders's famous implementation in Befunge.

Source code and the grid

The language's grid is triangular where each triangle either points north or south (as opposed to pointing either east or west). The triangle in the northwestern corner of the grid always points north. Such a grid can easily be mapped to ASCII characters, by alternatingly specifying an upward and a downward triangle. Consider the following grid: 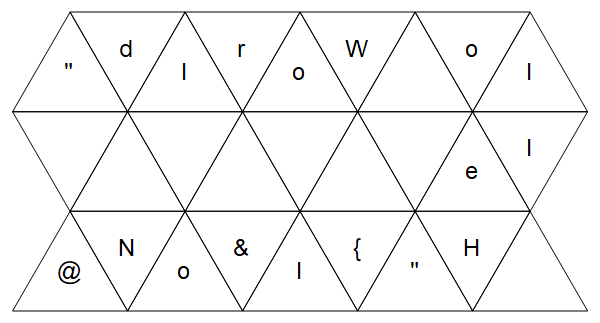 The corresponding ASCII representation would be:

And this is exactly how source files for Wumpus are interpreted. If not all lines of the source files have the same length, the shorter lines are padded to the maximum length with spaces (so the space after the H in the above program could have been omitted). We'll call the number of lines in the program the height and the maximum line length the width. These are fixed throughout the program (while it's possible to modify the grid at runtime, it can never shrink or grow).

The grid actually stores signed arbitrary-precision integers, and will initially hold the code points of the characters in the source code. 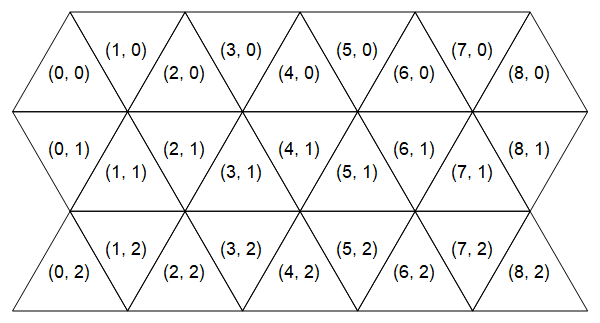 These are just the normal (0-based) 2D coordinates you'd expect for the characters in the source file. For vertices, only vertices which are surrounded by six cells have coordinates, and they're assigned as follows: 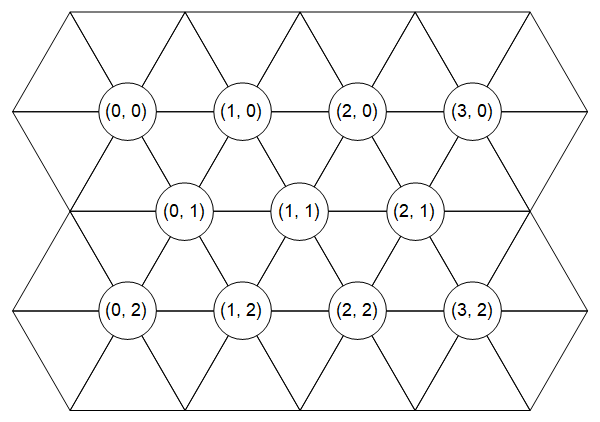 Wumpus has a single instruction pointer (IP) which always moves parallel to the edges of the grid. The six directions it can move in will be referred to as E, NE, NW, W, SW and SE. The IP always starts in the top-left corner of the grid (coordinates (0, 0)), moving east. The IP will alternate between visiting upward and downward triangles. In most other Fungeoids, the grid wraps around the edges. Not so in Wumpus: instead, the IP will reflect off the boundaries of the program. A simple diagram should make clear how exactly this reflection works: 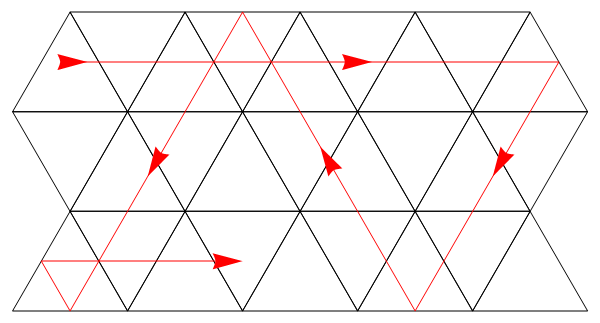 These reflections do not cause the current cell to be evaluated again. That means the bottom-left cell (coordinates (0, 3)) is only executed once in the above example. However, the cell at (1, 3) would be executed twice, because it's entered both before and after the bottom-left cell.

Note that when the IP moves along a diagonal, its path in the source code actually has the shape of a staircase.

It's possible to set the strafing flag with the , command. This causes the the IP to take the next step orthogonally to its current direction. Whether this movement goes left or right from the IP's perspective depends on the orientation of the current grid cell (because the IP can only ever move across edges). Here is an example of movement through a grid which contains three ,s: 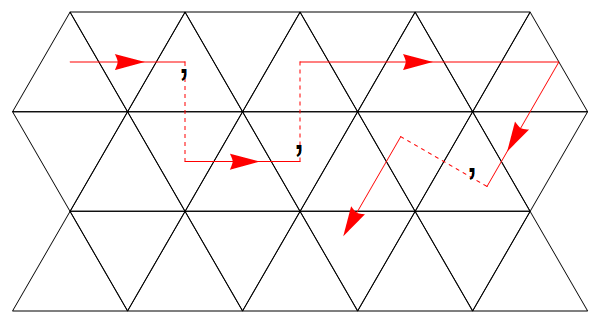 The dashed lines indicate strafing steps. If the strafing step would cause the IP to go out of bounds, the IP will take a regular step instead. Either way, the strafing flag is set back to false after every step (so using , when strafing is impossible due to the grid boundaries, the command will not be stored up for a later step).

There are several other commands to redirect the IP at runtime, but these should be self-explanatory.

Wumpus's memory model consists of two parts: the stack, and the icosahedron. Both store signed arbitrary-precision integers. You can also think of the grid as a third part of the memory model, which doubles as the program code.

The stack is the primary data storage. Most commands pop their arguments from the stack and push the result back onto the stack. The stack is initially empty. Trying to pop from an empty stack results in a 0 instead. There are enough stack manipulation commands in the language that you never need to use the icosahedron if you don't want to (unless you need to generate random numbers).

The icosahedron is a collection of 20 registers, each of which has an index from 1 to 20 and is associated with one face of the icosahedron. This document will generally refer to the registers as "faces". There are many possible icosahedron nets, but for the purposes of this document, we'll use the following two (these are just different unfoldings of the same icosahedron): 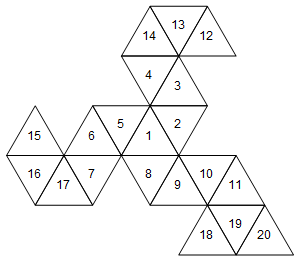 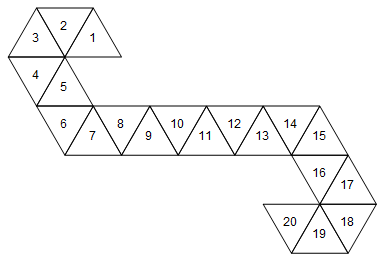 If you can get your hands on a Magic: the Gathering spin-down die, it's strongly recommended to have it on your desk while trying to work with Wumpus's icosahedron, as they use the same face labelling.

It's possible to rotate the icosehedron arbitrarily, but the relative positions of the faces will always remain the same. There's an active face, which is the register you can directly interact with – initially, this is face 1. There's also an orientation to the icosahedron, which determines which neighbour of the active face rests where.

This section is a complete reference of all commands available in Wumpus, grouped into several categories of commands. Remember that the grid actually stores the characters' code points, so each of the characters listed here actually represents its code point. Any character (or code point) that isn't listed here is a no-op (i.e. does nothing).

Remember that the icosahedron should be pictured as resting on its active face, with the face pointing north. Each fixed rotation is accompanied by the permutation it applies to the faces. If the ith face of the permutation is ki, that means applying this rotation to the initial icosahedron orientation will move face ki to where face i used to be. Any references to specific faces refer to their initial position. I.e. "face 1" refers to the active face (regardless of its actual index), "face 2" refers to the active face's northwestern neighbour, etc.

Rotations A, B, C, P, Q and R are all rotations of an edge and and X, Y, Z are rotations about a corner. The following diagrams indicate which edge or corner they rotate about, assuming that the grey face is the active face. Remember that the net looks at the icosahedron from below, so east and west are swapped relative to the descriptions above. 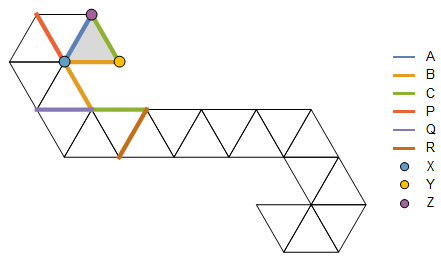 There are also a few non-fixed permutations:

Finally, there a few commands that let the icosahedron interact with the stack: