vizh is a visual esoteric programming language that takes image files as input and is based on a multi-tape Turing machine. It is designed for compatibility with C and was created by User:TartanLlama in 2021.

The "parser" has to use computer vision and OCR to process the user's code. Here is an implementation of memcpy:

Here's how the parser understands the program (produced if you pass --debug-parser when compiling):

More complex programs can be written by splitting the symbols across multiple lines, such as this function which counts nested square braces: 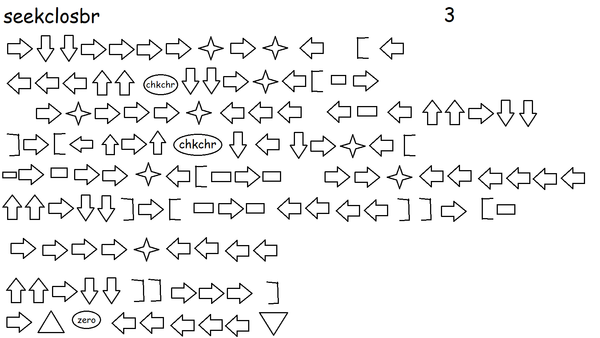 The vizh abstract machine consists of:

The initial state of the abstract machine is:

A vizh program consists of a number of functions, each in its own image file.

The entry point to a vizh program is a function called main. (Note that the main function gets mangled as vizh_main. For all other functions the symbol name is the same as the vizh name).

A vizh function is an image file containing:

The tapes available to a vizh function consist of its tape arguments. A function returns when control flow reaches the end of its instructions. Any tapes allocated by a function are automatically deallocated when the function exits.

When you call a function subsequent pointer arguments are taken from the currently active tape onwards.

For example, given the following state of the abstract machine where ^ is the last position of the r/w head on that tape and $ is the active tape:

then a call to a function that takes two tapes would supply the arguments t2, t3.

When you move the r/w head up or down, the position it was last at for the previous tape is saved. E.g. given this state of the abstract where ^ is the last position of the r/w head on that tape and $ is the active tape:

The sequence of instructions "right right right down" would result in this state:

Comments in vizh are anything enclosed in a rectangle. Stick what you want in there.

The vizh standard library is called libv and the majority of it can be implemented in pure vizh.

Since vizh is essentially a multi-tape Turing machine, it is Turing-complete.

The ability to allocate multiple tapes and call functions makes it much more useable than something like Brainfuck. You can find an implementation of a Brainfuck interpreter written in vizh on GitHub.

An implementation written in Python which uses OpenCV and Tesseract OCR to parse code and outputs C is available on GitHub.