Multidodecagony is a language made by Joaozin003 inspired by Hexagony, which is laid out in dodecahedrons. Ugh!

This language's name was derived from Hexagony: multi means multiple, dodeca means dodecahedrons, agony just because it's super hard to code in.

The program is laid out in an array of regular dodecahedrons. In each of a dodecahedron's faces, the face is separated into 5 triangles in a circle.

Each triangle contains a command, and the command pointer traverses through them.

There are also commands which cause the CP to warp to another dodecahedron.

The memory is just a simple stack. If you don't know what it is, here's an explanation:

Imagine a stack of papers. You can put a paper on top of it (this is called pushing), and later you can take it out to do things (this is called popping). You cannot take out things from the middle or bottom of the stack.

Finally we can get to the commands. All commands not specified here are comments. 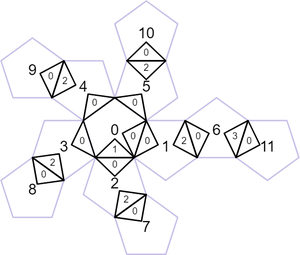 A diagram for the Multidodecoordinates

Did you see the w and g commands? What do d, f and t mean? These are multidodecoordinates.

The d variable is the simplest: It indicates the dth dodecahedron.

And the most complicated variable: f.