Not to be confused with Marz.

Mark is a cell-based fungeoid language made by User:MeowcaTheoRange. It uses a proprietary editor written in JavaScript, HTML and Kaboom to create and edit programs.

It is sometimes described as Befunge Scratch (or more accurately, ><> Scratch) by the creator due to the editor's visual nature.

Mark uses two instruction pointers (called "Command Pointer"s in the Editor) named Mark (the yellow one, who is the language's namesake and seems to be program default) and Bean (the green high-quality one.)

Data is usually stored on a cell-based tape, values of which are displayed above the Editor's console. The tape is infinite, and can contain holes (that are usually patched when values are written to the tape). Data can also be stored in various elements, to make code golfing in Mark easier.

Mark was created for MarkJam #2, a jam which ran on itch.io that presents various media related to a character Mark. The language and its editor were created in two days.

Mark has many (aforementioned) dialects, listed below.

The Mark dialect cannot be written in text. It can only be seen using a software to screenshot images. This can make it hard to display it in places like wikis and IRC chats.

The Mark dialect is the main dialect that the Mark editor can understand. Mark boards are 48 x 48 visually, but these limits can easily be pushed with a compiler mod. Elements are displayed visually, as a sprite, or sometimes a colored square with an arrow. (The Constant element is displayed with a number over it.)

Markcode is a little bit easier to write down on a notepad or a text editor, however, it is still not very favored, because it has a very high tendency to bloat, making it harder to store.

Markcode elements are displayed as a JSON array, with 3 values:

(Empty elements and columns are displayed as null instead, which is why filling a column with only one element is considered extreme bloat, because the columns suddenly have one element in it, followed by rows of null.)

Simple Mark is a proposed dialect of Mark which will make it easier to write down and create Mark programs on a common piece of note paper. It is currently in development. The Simple Mark beta with examples can be found here. The format of Simple Mark elements is seen below:

Mark programs run instructions using various elements on a 48 x 48 board. Some elements can be oriented in different ways, sometimes making them run different instructions or print an output in ASCII compared to RAW. These elements listed do the following: 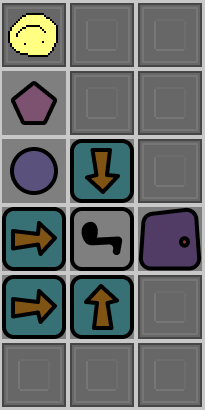 A Truth Machine created in Mark.

A Hello World program written in Mark, using the Golf element. The output is unseen, but I swear it's "Hello, World!" 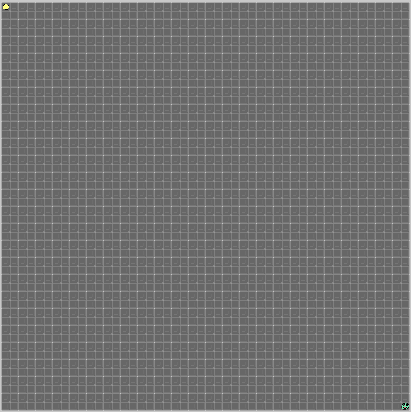 The whole instruction board in Mark. Zooming out the Editor this far causes a huge hit to performance.
Retrieved from "https://esolangs.org/w/index.php?title=Mark&oldid=96347"
Categories: