Computation in Grid is represented by applying different transformations to unbounded two-dimensional grid.

Grid is not initially intended to be a programming language, but since it turned out that some instructions have interesting properties, it may be worth to document the computational capabilities of it. The main idea dates from around 2007. First formal rules were established in around 2009, while the first working implementation appeared in 2017. There had been a very large number of edge cases and issues with the interpreter, but all of them were fixed in 2018. At the end of 2018, the first working interpreter that covers all edge cases was published.

However, that interpreter worked only for bounded grid (arbitrary, but fixed size). The first interpreter that works for unbounded grid was published later in 2019. and now Grid can be considered a well-documented programming language with precisely defined instructions and I/O format.

The idea behind this language was to design a language which has the following properties:

Grid can be considered a Turing tarpit. It has small number of instructions and basic loops, but there is also one very powerful instruction that transforms the whole grid. Memory consists of 2D square grid, unbounded in all four directions. Squares (grid cells) are called tiles. Each tile can contain one of four different entities and can be bordered by up to four lines (for each side of the tile). The entities are:

A single tile can contain at most one entity. Tiles that have no entities and no lines are called empty tiles. Lines are shared between adjacent tiles. For example, if one tile has line on the top, then the tile above has line at the bottom. Deleting the top line from the below tile also deletes the bottom line of the tile above. Similarly applies to other directions. There are some constraints, though. If a tile contains wall, then it also contains all four lines. If two adjacent tiles both contain voids, then there cannot be a line between them. Tiles are considered adjacent if they share a side (see Von Neumann neighborhood).

There are two types of tiles: external and internal. External tile is any tile that satisfies at least one of the following conditions:

Internal tiles are all tiles that are not external. Here "path" means the sequence of adjacent tiles such that there is not a line between any two consecutive tiles. Note that type is not an intrinsic property of a tile - it can change over time depending of the tile content. 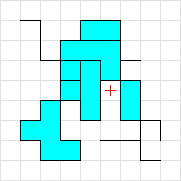 Example of the cursor and three different line types

At the beginning of the program execution, all tiles are empty and the cursor is placed in a single tile (there are no absolute coordinates). On the image on the right we see the cursor (red plus) and some lines. The size of the captured grid region is irrelevant, because the grid is unbounded (the image shows only 9x9 grid region near the cursor). Internal cells are blue, while external ones are white.

In all images in this article internal cells are blue, except if there is a wall in the cell. Each cell that contains a wall is also an internal cell. It follows from the abovementioned rules:

Therefore, all tiles that have walls are internal. Instructions allow moving the cursor or adding/removing entities and lines. There are if statements and while loops, and there are also instructions for reading from stdin and writing to stdout.

The most powerful instruction, called "A", is what brings the power to the language and makes computation even more hard to predict. It is thoroughly explained in this article.

Only ASCII characters are allowed in the source code. Whitespace is ignored (even if appears in the middle of an instruction). The language is case-insensitive.

Both input and output are streams of bits.

Since the language is case-insensitive, both uppercase V or lowercase v can be used to move the cursor down. There are no limits regarding cursor movement: it can cross any line and any entity. Moving the cursor does not modify any tile. Note that the cursor is not an entity - it does not interact with lines and entities and it does not subject to any constraint.

Letters U, R, D and L are used to modify the top, right, bottom and left line, respectively. Lines are modified in the tile that is being pointed by the cursor. After the letter, one of the characters +, - or ~ may appear. It means: add, remove or toggle the line, respectively. If omitted, toggle is used by default.

Letters B, W, X and I are used to edit black circle, white circle, wall and void, respectively. Similarly, +, - or ~ can be used. Adding an entity will add it unconditionally, removing another entity from the tile if there was one. Similar applies to toggling. Removing entity from a tile that does not contain the specified entity has no effects.

Removing walls will keep the surrounding lines. Removing two adjacent voids will not re-create the line inbetween, even if there was one before adding the voids. For example, B-W-X-I-U+R+D+L+ is equivalent to X+X-.

Code blocks are denoted by parentheses and used to group instructions. They can contain zero or more instructions and can be nested. Examples: (), (>B+), (BW(X)I). They are useful in if statements and while loops, but can also appear anywhere in the source code. Code block is treated as a single instruction. Character , is syntactic sugar for ().

Dot . followed by one or more 0s and 1s. Examples:

Grid is trivially Turing-complete, as any Boolfuck program can be written in Grid using the following conversions:

This also proves that the language would be Turing-complete even without the instruction A. Note: U can be replaced with any of R, D, L, B, W, X or I, but it needs to be done consistently in all instructions. 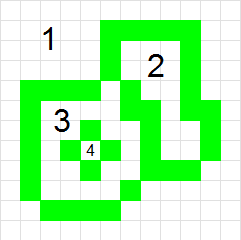 Four fragments. Fragment 1 is unbounded, while 2, 3 and 4 are bounded.

Instruction A transforms the grid. There are 7 steps in grid transformation. Note: in the following steps, when we say internal tile, it means internal tile which does not contain a wall.

Each fragment is treated as a separate realm. Whatever happens in one fragment does not affect other fragments. Instruction A may change lines, circles and walls, but can neither add nor remove voids. Remaining steps are applied to each fragment separately. Voids are not a part of a fragment.

Step 2. Get rid of external lines and entities

First mark each external tile that either:

For each marked tile, set all lines in that tile which either shares a side with a non-marked tile, or satisfy all of these conditions:

First, for each internal shape, remember whether that shape contains at least one circle or not. This information is used later in the algorithm. Then remove all circles from all shapes.

Step 4. Fill internal shapes that did not contain circles

Example of connecting internal shapes that did not contain circles before step 3.1 The image shows the grid before and after step 4.

Then for each marked tile put all lines that are not inbetween two consecutive tiles in the path (this also applies to lines between a marked and a non-marked tile). After that, unmark all tiles, but remember that the internal shape that contained the marked tiles is finished and do not process it again. Repeat step 4 until all internal shapes that did not contain circles are finished. Note that new non-finished internal shapes may be formed during step 4.3 - they also need to be processed. 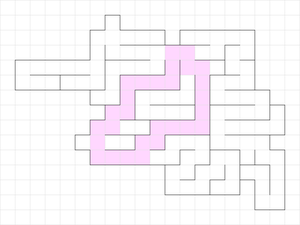 Example of a loop.

Here loop is a set of internal tiles such that at least one tile can be reached from at least one another tile in at least two different paths that do not cross any line and that are both subsets of the loop. If there are no loops in the given internal shape at the beginning of step 5, then skip that shape.

At the beginning of this step, since all previous steps are done, we know for sure that in the current grid fragment:

In this step, all internal shapes will be connected into a single internal shape without loops. That is done in the following manner:

Put white circles in all internal tiles that have exactly three lines and no black circle.

One may notice that in some steps we assumed something that, in general, may not be true. For example, in step 3.2 we assumed that there is at least one internal tile, but actually there could be none. This paragraph covers all special situations. When one of the following cases is encountered, all 7 steps are skipped and the situation is handled in a special way.

The unbounded fragment cannot be completely filled with walls (because it is infinite in size), but a bounded fragment may contain a wall in each tile. In that case, just put a black circle in the best tile of the fragment, implicitly removing the wall from there. Keep the lines that were around the wall.

If there are no lines or entities in any tile, then there are two cases:

Note: void is, is negeral, not a part of a fragment, but we consider them in this special case.

If all tiles in the given fragment are exactly the same before and after applying the instruction A (but before considering this edge case), then there are two cases:

The Unchanged fragment edge case does not apply if All empty tiles edge case can be applied.

All edge cases are covered in the video.[1] The grid region that is shown in all tests that appear in the video represents a bounded fragment, surrounded by voids. Each of the 21 tests shows the fragment before and after applying instruction A.

Instead of concrete examples, we provide random source code generator.[2]

Here are some useful patterns that may help in writing programs.

If the cursor is at any position in some internal shape, this piece of code will move the cursor to the tile that contains black circle. If there is no such tile, it will roam in the shape forever.