EXDotSF started off as an interpreter written in C that implements enough of the original DotSF specification required to be able to run code written in the latter language. In addition to the original DotSF single-character commands, EXDotSF adds basic comparison commands, a ternary-if-else command, some more stack manipulation commands, and even some multi-character commands which are detailed in the next section of this article.

Notes and considerations about EXDotSF

Planned new features that have yet to be worked on

There are currently none at the moment.

Planned new features that are currently being worked on and implemented

There are currently none at the moment.

Print "Hello world!" and then a newline

A more verbose Cat program that prefixes the output with "-> You wrote: " (minus the double quotes)

Calculator program (asks user for an operator (+, -, *, /) and two integer operands and outputs the result 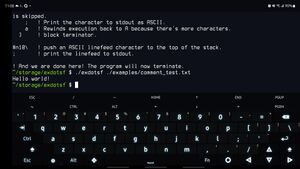 EXDotSF running on Android via Termux 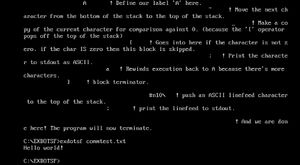 EXDotSF running in MS-DOS via DOSBox

GitHub repository (Building and running instructions are here in the README): https://github.com/SIGSEGV-666/EXDotSF/