Computing crystal or crystal co-processor or crystal processor is a speculated piece of hardware that would implement a cellular automaton suitable for computation use, in a crystal formed from specially designed or selected molecules that arrange in a repeating uniform homogenous topology. Interactions between those molecules transfer information and change the states of those molecules, implementing some rule set of some 2D or 3D cellular automaton that may or may not be already invented. Even though it would be computationally inefficient, its physical efficiency might outweigh that at least in some kind of computation. It could be possible to synchronize it somehow, to give it a clock cycle, maybe with a pulsed laser or phase of a radiowave, but if not, it might work as an asynchronous cellular automaton.

If the crystal uses 2D automata, they can be drawn / written / inputted on the crystal's frontside and then every step of the automaton moves its layer one molecule width closer to the backside of the crystal where its state can be read / outputted. The crystal could have as many layers of 2D cellular automata computing simultaneously as it has molecule layers between its frontside and backside. 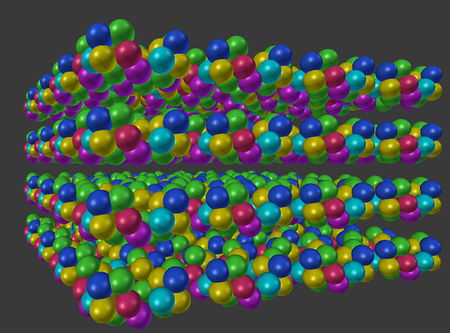 Diagram of pseudo/faux molecules in a crystal arrangement to give some idea about how a molecule diagram of a crystal computer would look like. The "molecules" are symmetrical around a vertical axis in 4 directions.

Possible turing complete cellular automata that could be used in it