This is the desugared primitive form of the following Cammy expression from the reference hive:

The internal language of a Cartesian closed category is always a lambda calculus. [2] We can therefore explore an example in terms of lambda expressions. Note that categorical arrows are not necessarily functions! The following Cammy expression has type N → Ω and tests whether a natural number is even:

Several complicated ideas are tied together here. First, note that destructuring in categorical combinators is implicit. We had to introduce the idea of case/match syntax in order to implement primitive recursion, but primitive recursion is taken to be an axiomatic feature of natural numbers objects. When we work categorically, that entire case/match construction is encapsulated within the axioms. This also occurs with lists (free monoids); there is only one type of recursion, the katamorphic fold.

Next, note that fixpoint recursion is also implicit. There are no arbitrary fixpoint combinators in Cammy, just the predefined combinators for natural numbers and lists. The OCaml and Scheme implementations of Cammy must use their own recursion techniques to implement these combinators.

Each Cammy expression is a diagram which selects arrows in the target category. When the diagram is parameterized over a choice of source object, then we assign it a single polymorphic arrow instead of a family of arrows. To demystify this utterance and introduce some syntax, here is the simplest such diagram, the identity arrow:

This expression has type X → X, where X is any source object whatsoever. For contrast, here's a diagram which doesn't have any choice of source objects:

This expression has type 1 → N, where 1 is the terminal object and N is the natural numbers object. Traditionally, there would not be a single identity arrow, but a family of arrows with one member for each different possible object; but Cammy treats both expressions similarly, and allows them to be freely intermixed.

We also have functors which take static parameters. For example, we may take any two arrows with types X → Y and X → Z, and produce a new arrow with type X → Y × Z, where once again X, Y, and Z range over objects. This diagram therefore has type X → X × X for any object X:

A complete listing of the primitive functors follows, grouped by functionality. X, Y, and W are metavariables for types as before, but 1 is the terminal object, 2 is the Boolean object, and N is the natural numbers object. Equalities denote algebraic laws.

An appendix at Cammy/Bikeshed explains the nomenclature.

The floating-point numbers object behaves like wikipedia:IEEE 754, except that NaNs are not elements, since they are not numbers. The NaN cases of f-add and f-mul return 0.0 or -0.0 as appropriate. The NaN case of f-sqrt is sent to the right-hand side of the binary sum. The reciprocal of ±0.0 is ±Infinity and vice versa.

Cammy can load functors from hives, which are directory trees where files are Cammy expressions. By default, functors are nullary, but special names can be used to address functor parameters. For example, the nullary functor "swap" is usually defined as:

And the reference hive includes this as "fun/swap.cammy". As an example of parameterized functors, the unary functor "fun/name" is defined as:

The special name "@0" refers to the zeroth parameter. Arity is implicit and inferred during the frame step of the reference toolchain, so that (name id) will be allowed but (name id id) will be rejected.

In terms of the common taxonomy of type systems, exhibited for tutorial at [3], Cammy's current toolchain implements a static, implicit, structural, sound type system. For a classic example, the program (comp dup apply), sometimes called the "Turing bird", will be rejected by the toolchain as ill-typed.

In terms of the taxonomy of desugaring systems, Cammy does not implement desugaring. Any nullary sugar can be implemented as plain Cammy programs. Every algebraic equality in Cammy's combinators corresponds to a desugaring rule in the toolchain, but those equalities are not taxonomically syntactic sugar.

Cammy has wikipedia:primitive recursive functionals, placing it between PR and R. This complexity class has no standard name. [4]

The `cammy-frame` tool takes a hive and an expression relative to that hive, and returns an expression containing only primitive operations. No optimizations are performed.

The `cammy-jelly` tool reads an expression and simplifies it by applying algebraic optimizations. Jellification is ignorant of hives, but non-primitive operations are allowed; they will be opaque to optimizations.

A demonstration hive is included with the reference distribution. [5] This hive includes basic arithmetic on natural numbers and some folds on lists.

The `cammy-djinn` tool takes a type and returns a primitive expression with that type. It operates via relational logic, inverting the relation between expressions and types.

Types have a simple S-expression syntax. The concrete types 1, 2, N, and F appear as themselves. Polymorphic variables can be given any fresh identifier, like X, Y, Z, W, etc. The compound types are expressed as functors:

The `cammy-repl` tool takes a hive and examines it interactively. Cammy expressions entered at the REPL are expanded, jellified, and typechecked. The `:!` command evaluates and pretty-prints any element.

The `cammy-draw` tool interprets a simplified Cammy expression as a function from the two-dimensional plane to red-green-blue color triples. While interpreted, it is much faster than compiled native code because it is built upon the RPython JIT toolkit. 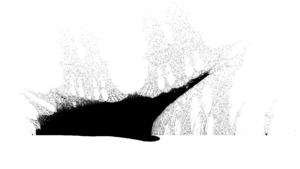