What is the brainfuck compiler?

The brainfuck compiler is a simple program that allows you to either copy paste, manually type, or open native brainfuck code and compile it into an exe file. This does not add any additional commands, as it uses the vanilla commands. For those who need a quick refresher, here's a list of them.

How does it work?

Where can I get the brainfuck compiler?

You can download it from this github link: https://github.com/Polybagel/Brainfuck-Compiler 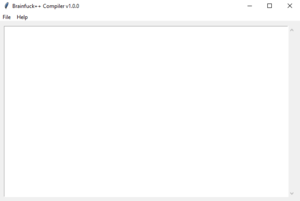 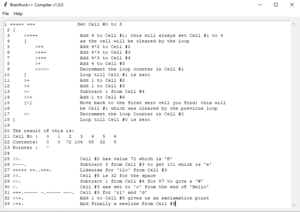 Hello world code in the editor
Retrieved from "https://esolangs.org/w/index.php?title=Brainfuck_compiler&oldid=80770"