Graphs are written with a string of lowercase letters; each unique letter in the string represents a different node of the graph, and if the same letter is used more than once, it refers to the same node of the graph. There is an arc between any two letters which are consecutive in the string, but not otherwise. For instance, the string abcdae would map to the following graph:

Comments can be included in the source file between commas, and are legal anywhere whitespace would be; also, any strings of whitespace that contain punctuation marks other than commas and parentheses are ignored along with the punctuation marks they contain (so abc. def is equivalent to abcdef).

An Eodermdrome program works by repeatedly rewriting a graph, which represents the internal state of the program. At the start of any Eodermdrome program, the internal state is the graph corresponding to the string thequickbrownfoxjumpsoverthelazydog. Which letter is used for which node is immaterial between commands; it's the shape of the graph that matters, not the letters used to define it.

Execution of the program works by repeatedly running commands; the commands do not run in any particular order and can run any number of times. However, commands only run if all their prerequisites are met. If no command in the program has its prerequisites met, the program will exit; otherwise, an unspecified command whose prerequisites are met will be run (this means that an interpreter can always choose the first, or the last, or a random command, or use any other method to determine which command runs, if more than one can run).

If a command has an input set, it has a prerequisite that the next character to be read in from standard input must be a member of the set.

When a command runs, it does the following, in order: 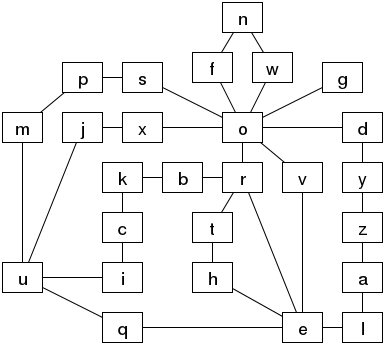 Matching rules in Eodermdrome requires solving a variant of the wikipedia:subgraph isomorphism problem. There are a small number of interpreters, all based on Ullmann's algorithm (essentially a brute-force search):

Subgraph isomorphism is NP-complete, so a simple interpreter will take up to exponential time (in the size of the match graphs) for each rewrite step. Improving on this would be an interesting challenge, if one could be bothered to work on it.

A version including ASCII drawings of relevant subgraphs is available.

Note: BCT program part should be at least 3 characters long.