4BOD, or alternatively 4 Bits of Doom is an esoteric fantasy console and machine language made by puarsliburf games for the FC Dev Game Jam in 2017. It parodies the style of other 8-bit style Fantasy Consoles such as Pico-8 and Tic-80 by having extremely low "specs".

4BOD is said to have 0.384 kilobytes of program memory, 0.008 kilobytes of RAM and 0.032 kilobytes of VRAM. Programs are created by drawing a black and white image in the built in editor representing 1s and 0s of machine language. It uses 4 bits for the 16 opcodes each with 0-2 4 bit operands.

The original implementation seems to be bugged to the point of (more than intended) unusability. The original developer said they lost the source code so it will likely remain unfixed. So use an open-source reimplementation if you want code where bugs can be fixed.

All arguments are 4 bits and can have a value of 0 to 15. The program is called every frame and endless loops within the code freeze 4BOD.

Display a 2x2 Square in the center of the screen. 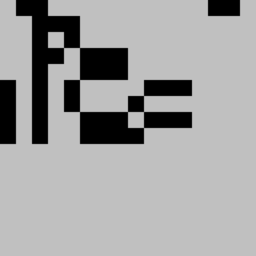 
A re-implementation in Python3